“Paul” is the grandson of Juanita ”Holy-named Woman” Left-Hand. Juanita, a Native American woman was one of the last speakers of the dialect spoken by her tribe, the Assiniboine. Born around 1896, she witnessed the long battle to maintain traditional Indian life on the reservation as it was fought and lost. Juanita was overjoyed when historians came to ask her help in transcribing the dialect and the traditional Indian stories and their accompanying hand gestures. Those transcriptions, as well as her traditional beadwork designs and dolls now reside in the Smithsonian Institution Archive.

The text is the Indian Removal Act of 1830, which mandated all Indian Nations in the southern states to be relocated west of the Mississippi. This document was one of the opening salvos to the systematic dismantling of native cultures and that relocation resulted in what is known as the “Trail of Tears” which decimated the populations of the southern Indian Nations. 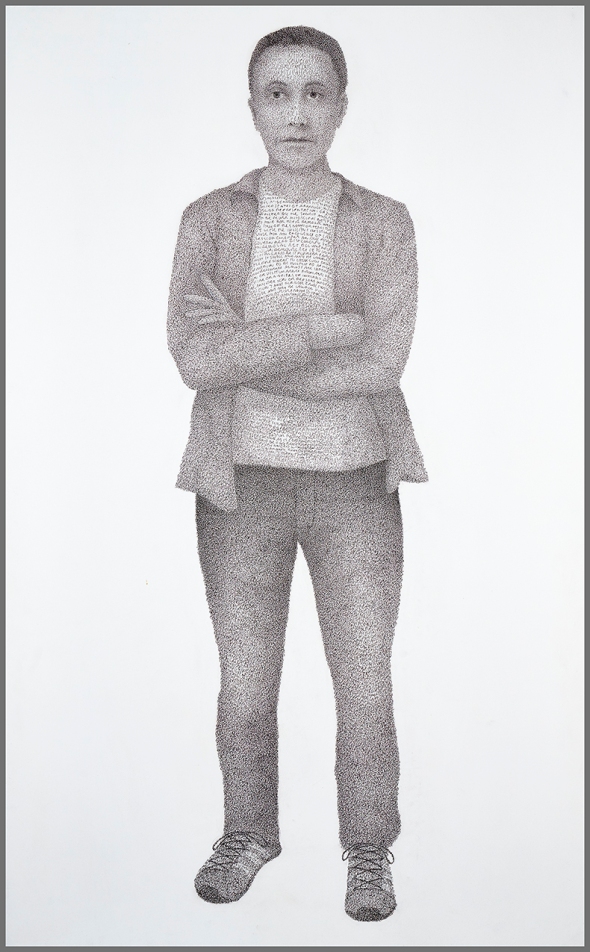 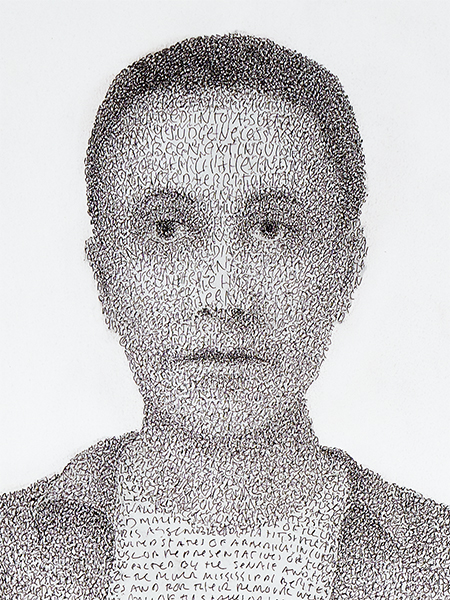 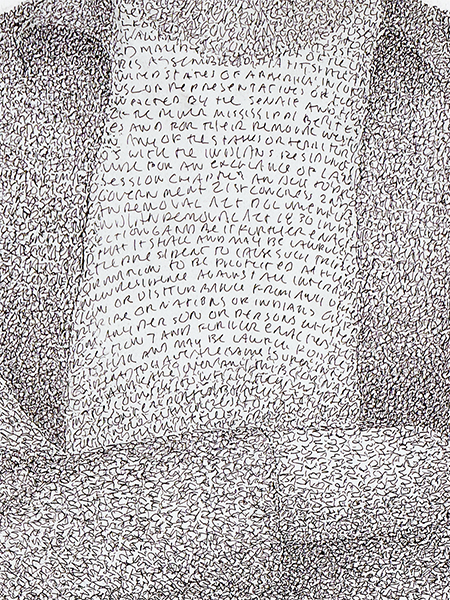 This entry was posted on August 20, 2019 by bryanida. It was filed under Uncategorized .

I am honored to have another piece placed in the incredible Resnick Collection. It is wonderful to feel the validation and support especially when embarking on a new series of work. #resnickcollection #laartist #painting #artwork #trees #forest #creative
Feb 4-28, 2020 I will be showing all 12 of my Ink on panel portraits in the Cilker Art Gallery on the campus of West Valley College in Saratoga, CA. The intent of this series is to portray individuals as the embodiment of strength and pride standing in defiance in the face of oppression and fear by a power against them. With the current social and political environment and the recent acts that repeat past abuse and injustice I am attempting to view historic events in the context of the contemporary climate. I research and reference the text from government documents, declarations or other forms of institutional communication and use the words as my mark to render each person with the very words that affect them. Using the word as a building block in the formation of the image does not label or define the subject by the words being used, instead the words are blended together and blurred and they are transformed from a label to a broader gesture that is used to define a new visual standard of vitality and beauty. #ink #portrait #westvalleycollege #cilkerartgallery #laartist #compassion #hopeandstrength #artwork #creative #contemporaryart
“Waterfront” 39”x71” just finished another in my environment based tree paintings. #environment #tree #forest #waterfront #painting #climate #laart #artoftheday #creative #artwork #contemporaryart
Work in progress #wip #laartists #treesovertrees #trees #colorcontrast #color #painting
A catalog of the first 12 portraits in my “con.Text” series is available at blurb: https://www.blurb.com/b/9617045-con-text With a short essay by megan frances abrahams. #catalog #context #penandink #portrait #drawing #instaart #gallery #artist
“Forest Deep” untaping reveal #forest #trees #treesofinstagram #art #painting #inprogress #environment #gallery
“Nature Decoded” 23x47 trying to find balance between human advancement and nature #pollution #nature #balance #outofbalance #trees #artwork #paint #creative #environment #instaart #gallery #fineart
“One Tree Standing” 36x71 variation on a theme for a commission headed to Taiwan #environment #tree #painting #landscapepainting #artoftheday #gallery #paint #creative #instagramartist #greenforest #sunsetmidday
Two of my pieces in the “Ink and Clay 44’ show at Cal Poly Pomona in the Kellogg Art Gallery received awards. “Grandfather” was awarded the Juror’s Choice Award and “Manzanar” received honorable mention. Very grateful. #inkandclay #kelloggartgallery #inkportrait #penandink #gratitude🙏 #incarceration #artoftheday #gallery #creative
Ship. #ship #ocean #cargo #instaartist #gallery #creative #photooftheday
%d bloggers like this: